Firearms, the main instrument of death in Honduras 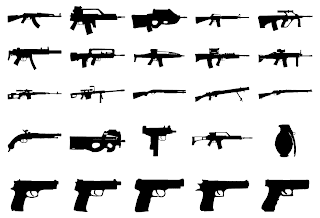 Honduras is one of the three countries in the region would be circulating much of this weaponry. It is estimated that the country has more than 800 000 weapons from various sectors of the population, of which 650.000 would circulate illegally.

Most violent deaths occurring in Honduras are not caused by weapons such as tanks, artillery and warplanes but weapons like the AK-47 assault rifle, machine gun, pistol, revolver, machete and knife. In recent years, statistical registers firearms identified as the main instrument of death in the country.


About 85% of the 3.587 violent deaths in 2011 were committed with firearms.
Honduras has become a battlefield. Around 650,000 weapons circulating illegally in Honduras.
At least that's what he said the National Commissioner for Human Rights (CONADEH), released by its owner Ramon Custodio Lopez in previous years.
The report discloses that in Honduras there are currently more than 800,000 weapons in various sectors of the population.
Given this concern, Custodio Lopez has urged the legislature to revise and amend the Law of Firearms Control and create mechanisms to control the thousands of illegal arms circulating nationally.

The Carrying of Weapons Act authorizes every citizen in possession of five firearms trade, which together with the large amount of illegal arms circulating in the country, is one of the main causes of the violence experienced in the main cities of Honduras.

According to studies, it is estimated that in Central circulate around 3 million firearms and two out of three would cover illegally.
Honduras is one of the three countries in the region where it would be circling much of the weaponry that is used by organized gangs to commit crimes.
Deaths
According to the Human Rights Commissioner, the majority of violent deaths that occur in our country are not caused by weapons such as tanks, artillery and warplanes, but weapons like the AK-47 assault rifles, machine guns , pistol, revolver, machete and knife.
"In recent years, statistical records of the Department of Forensic Medicine firearms identified as the main instrument of death in the country," said Custodio López.

During the internal conflicts experienced in the 80s, in Central America, the supply of guns and light weapons was abundant and despite the disarmament run as part of the peace process, in the 90s, many of these weapons were not destroyed and not ruled to be still in circulation in the hands of criminal gangs, organized criminals, drug cartels and in the hands of civilians.
. Though the police have seized large amounts of weapons, boxes of M-16 rifles, about 1,000 chargers for this same type of weapon, military use grenades, 25 RPG anti-tank capable of shooting down a helicopter, guns and rifles AR-5 AK-47, among others. In May of 2011 found in a school in the north, heavy weapons and ammunition. Were found two AK-47, an R-15, a rifle owned by the State of Honduras and balaclavas.
.
The problem of European arms reduction was not on the agenda, Macdonald said the gradual disarmament is the surest way to ensure eternal peace. Of course, if all countries to disarm, peace be seriously guaranteed.
Generally speaking, it is easy to show that the problem of "gradual disarmament", if examined closely, is nothing more than a tragic farce. The issue of disarmament resulted in the reduction of armaments. And finally, the latter was reduced to the establishment of naval parity between the U.S. and Britain. Today proclaims that this "conquest" is the best guarantee of peace.

With the killing of Connecticut, who left last week 26 people, including 20 children, the voices of those calling for more gun control again heard, while President Barack Obama, Nobel Peace asked his vice president Joe Biden I have a response to gun violence and to examine and regulate the sale of assault weapons and large capacity magazines.
While Obama is willing to take actions that may have a high political cost, must confront a culture where bear arms is part of the national character, defended by the Second Amendment of the U.S. Constitution. Without the power of the NRA (National Rifle Association, for its acronym in English). While efforts were made discreet since the killing of Newtown, environment conservative Fox News stated that the membership of the organization, which claims four million members, had been fired from the slaughter.
On 9 March, Republican U.S. Senator Charles Grassley asked the Secretary of Homeland Security Janet Napolitano, regarding an investigation that identified U.S. official involvement in arms trafficking to Mexico, Central America and Colombia

The investigation came after federal agents were killed in two shootings in early 2011, and that the weapons that detectives recovered, including two AK-47-linked suspects were already investigating the Bureau of Alcohol, Snuff, Firearms Firearms and Explosives (ATF, for its acronym in English).
Grassley ATF agents accused of allowing hundreds of weapons "flowed" from gun shops in the U.S. to criminals in Mexico and Central America to strengthen cases and gather more evidence against prominent arms dealers.

The operation, dubbed "Fast and Furious", facilitated the entry of numerous weapons, March 3 this year, media reports account for about two thousand weapons. Also, refer to the length of the entry of weapons coincided with the increase in homicides in Mexico rose to 60,000 in the same period (around 2007), according to reports ATF agents, assigned there. The operation comes from the "Project Gunrunner" or Messenger of Arms Project, the ATF.

The result Honduras still not get the legislature to introduce amendments to the Act to carry weapons and supplies explosives, allowing the reduction of crime

ARTICLE 17. - Created the National Register of Arms, as
a dependency of the Secretariat of State in the Office of
Security and will among other responsibilities ... Individuals may register a maximum of five (5) firearms, except as provided

ARTICLE 7. - For the purposes of this Act are deemed permitted pursuant
with regulations to that effect, and defensive weapons following sports:

1) or short Fist Weapons: Revolvers and pistols
up point forty-five inches (45.), or eleven point five
mm (11. 5) gauge;
2) The shoulder weapons or long: Action Rifles and carbines
mechanical and semi-automatic up about three hundred and eight inches
gauge (. 308) and;
3) mechanical action shotguns or semiautomatic, the bores
ten (10). twelve (12), sixteen (16), twenty (20), and point
four hundred and ten (. 410), if the barrel is not less than
forty-six inches (46 cm.) or eighteen (18) inches
www.xibalbahonduras.blogspot.com

itsmania pineda plateroHonduras closed 2012 with 32 000 384 U.S. deportedTegucigalpa - closed 2012 32 000 384 returnees, Hondurans deported by air from the United States and this year with the highest number of registered repatriations authorities reported today Care Center Returned Migrants (CAMR).
And is that 2012 is the year when more number of Mexicans have been returned by air from the United States.


President Barak Obama announced that he would approve immigration reform, which would legalize 11 million illegal immigrants in the U.S., but this has been the government with the largest number of deportations registered to date.
Sister Valdette Willeman Care Center Returned Migrant (CAMR) revealed that in less than two months are counted 4.201 deported. "We do not believe that is a mass deportation, but increased compared to last year."
He said that 92% of the deportees are men.
www.xibalbahonduras.blogspot.com
Publicado por www.xibalbahonduras.blogspot.com en 12:23 No hay comentarios: