Number of attacks and murders In 2012, 414 attacks against WHRDs in Mexico, Honduras, Guatemala and El Salvador were reported. Guatemala registered the most attacks, followed by Honduras and Mexico 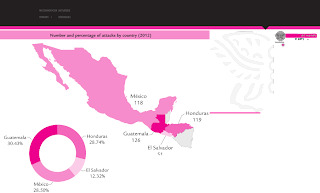 In Honduras, feminicides jumped by 62% in 2009, the year of the coup d’état
4
. In Mexico, according to ﬁgures from UN Women, the rate of feminicides increased an average of 68% from 2007 to 2009 (coinciding with an increase in the presence of army troops in a number of areas in Mexico)
5
. In Guatemala, the number of femicides registered rose from 213 in 2000
6
to 707 in 2012
7
. The ﬁgures demonstrate how violence against WHRDs is indicative of how violence against women works to maintain unequal power relations, perpetuate privilege, and prevent or discourage the political participation of more than half of humanity. Further, the stigmatization and discrimination endured by large groups of WHRDs has a widespread impact both because it affects the entire community represented by them and because it calls into question those who decide to reclaim their rights and adopt alternative ways of life, putting them at risk.
Publicado por www.xibalbahonduras.blogspot.com en 18:58 No hay comentarios: 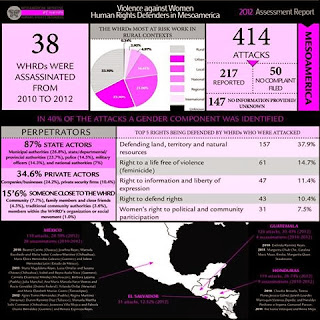