The Metamorphoses of Police Work and Strategy in the Americas 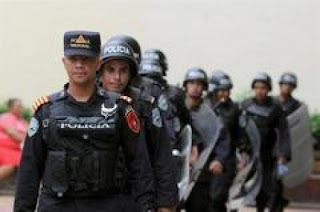 A clear defining message and issue to the world in the 21st century has become the militarization of what was once routine policing initiatives, and protecting and serving the public at large. Although the policing services of many nations of the world have struggled throughout the decades with transnational criminal insurgents, and a need for military-style tactics and weapons, the current global cycle is reflecting the need to comprehend that law enforcement is at its greatest crossroads ever witnessed by modern man.
In the Americas alone we have read ad nauseam of the barbaric bloody carnage in Mexico associated with gang violence, the drug war, femicides, migrant workers, and those kidnapped, tortured and ransomed for profit. We read daily of the latest city in the US to have the dubious distinction of having the highest murder rate, as if in competition with other communities in the nation.

As we digress to points south of the US border and Mexico, again we are faced with even more empirical graphic evidence of murder with impunity and almost an entire absence of the rule of law.  The northern triangle of Central America is home to the top two murder rates in the world. Honduras shares the sinister lead with El Salvador coming in second.

As we look further south, we see that in 2012 Venezuela was the “most violent country in South America with kidnappings, prison riots, and random shootings.” There are “more murders in Venezuela than in the US and the 27 countries of the European Union combined, according to news reports. In Argentina, further south, we see that the country is now a major conduit of drug trafficking and addiction. This even though it currently lacks the high statistics of murder or highly violent crime as seen in some nations to the north.

Argentina is currently a main transshipment route for cocaine from Bolivia, Peru, and Colombia intended for Europe and other destinations. There have been large seizures of cocaine in Europe linked to Argentina. Cocaine use has risen sharply in Argentina, and the country is home to 25 percent of the cocaine users in South and Central America, second only to Brazil. Cocaine remains the leading drug for which Argentines seek help at treatment centers. Argentina is also a source, transit, and destination location for human trafficking.  Around 70 percent of Argentine human trafficking cases are linked to drug trafficking, according to figures reported by the newspaper La Nacion.

Among the complexities in understanding what has become the urgency of the new role in effectively policing a homeland in this hemisphere is to admit that transnational organized crime undermines democracy, as well as free markets. National assets are severely impacted by those who must police and secure the streets, with front-line officers in harm’s way from inner-city streets to a country’s borders.

Strategic thought and impetus will clearly show that this new radicalized culture of terror far exceeds, influences, and challenges traditional crime for turf and other assets. It requires more technical expertise, tools and training, as well as acute strategic and focused leadership.

It also requires weapons that equal or surpass those military grade arms being utilized against law enforcement. Too, the training and skills for police must be superior to the advanced tactical expertise of many of the insurgents. Short of these types of considerations, use of the military might be the only alternative for many countries that can’t be defended by traditional police methods and infrastructures. The unfortunate result of this action is that the armed forces are not trained as police to enforce, arrest, and investigate crimes for criminal courts.

To those of us that have led and administered police organizations in border regions and other highly violent jurisdictions, it is easy to recognize the monumental challenges and tasks faced by governments against these criminal insurgents that greatly engage and impact the peace and stability of nations worldwide. While it is true that the principles and goals of policing remain largely unchanged, police challenges, tools, and strategies are dramatically evolving.

Policing in the US is getting no easier. Last Father’s Day weekend, in Chicago, there were 41 shootings, “with at least seven dead”.  The FBI recently reported that violent crime rose in the US in 2012 for the first time in six years, “led by an increase in major crimes in large cities”.

In this century, government officials and policymakers must recognize that transnational crime will be a defining issue as violent crime groups take advantage of unchecked authority, as well as the ability to easily transit borders, illegally move vast amounts of money and weapons, use sophisticated electronics, and wield superior weapons. (7/22/13) (photo courtesy Internet)

Note: This article was reprinted with permission of the author. It was originally published at MexiData.info. Jerry Brewer is the Chief Executive Officer of Criminal Justice International Associates, a global threat mitigation firm headquartered in northern Virginia. His website is located at www.cjiausa.org.
Publicado por www.xibalbahonduras.blogspot.com en 9:41 No hay comentarios: